According to BuzzFeed, the altered image of Jabbal wearing a suicide vest and holding a Quran was circulated on a Twitter account that has since been suspended. Despite the account’s being shut down, the faulty photo quickly spread across social media. It was even picked up by several pro-ISIS channels, as well as several European news agencies. 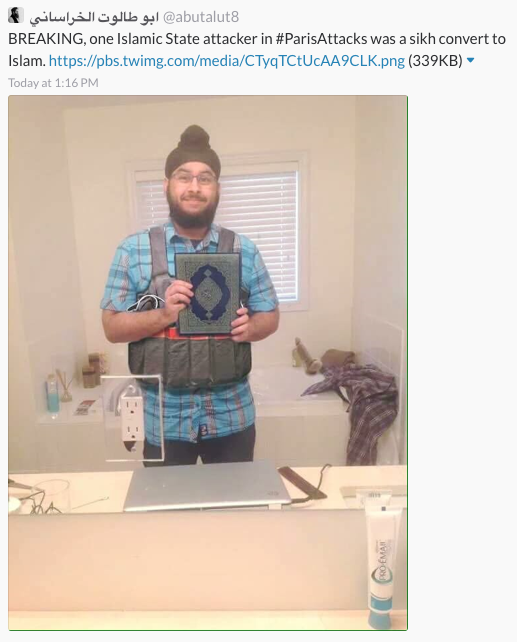 The original, unedited image was first posted back in August.

Not long after the photoshop went viral, Jubbal took notice when his Twitter notifications increased significantly. He then began tweeting about all the attention he was getting — from the press, from those he’d criticized in #GamerGate, and just about everyone else with a Twitter account.

People are editing, and photoshopping my selfies as if I am one of the people causing the issues/problems in Paris.

You can all check the last retweets.

Let us start with basics.

Never been to Paris.

Am a Sikh dude with a turban.

This image has been used, and placed on the front page of a major Spain newspaper–putting me as one of the people behind terrorist attacks.

Well, just got a phone call from a cousin in India, and they know about it; and saw the whole thing in India Times.

This whole thing puts me in a bad position in the sense, where I could be harmed and/or hurt due to this.

This is libel from news, and TV.