Gary Oldman Apologizes to Jews, No One Else, for ‘Offensive’ Comments

Gary Oldman Apologizes to Jews, No One Else, for ‘Offensive’ Comments 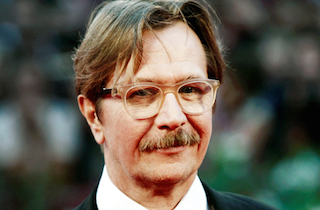 Gary Oldman caused a stir this week by going on a rant against political correctness in an interview with Playboy. The actor lamented the fact that liberals like Jon Stewart and Bill Maher can get away with saying anything they want, but as a conservative, he would be lambasted for, say, calling House Minority Leader Nancy Pelosi a “fucking useless cunt.”

Oldman also caught the attention of the Anti-Defamation League by defending Mel Gibson’s anti-Semitic behavior. “Mel Gibson is in a town that’s run by Jews and he said the wrong thing because he’s actually bitten the hand that I guess has fed him—and doesn’t need to feed him anymore because he’s got enough dough,” Oldman said. “He’s like an outcast, a leper, you know? But some Jewish guy in his office somewhere hasn’t turned and said, ‘That fucking kraut’ or ‘Fuck those Germans,’ whatever it is?”

The ADL responded by saying Oldman’s comments “irresponsibly feed into a classic anti-Semitic canard about supposed Jewish control of Hollywood and the film industry” and calling it “disturbing” that he “appears to have bought into Mr. Gibson’s warped and prejudiced world view.”

Now, as you can read below, Oldman has issued a “heartfelt” and “genuine” apology, expressing his “enormous personal affinity” for the Jewish people.

Read Oldman’s full statement below, as obtained by Deadline:

Dear Gentlemen of the ADL:

I am deeply remorseful that comments I recently made in the Playboy Interview were offensive to many Jewish people. Upon reading my comments in print—I see how insensitive they may be, and how they may indeed contribute to the furtherance of a false stereotype. Anything that contributes to this stereotype is unacceptable, including my own words on the matter. If, during the interview, I had been asked to elaborate on this point I would have pointed out that I had just finished reading Neal Gabler’s superb book about the Jews and Hollywood, An Empire of Their Own: How the Jews invented Hollywood. The fact is that our business, and my own career specifically, owes an enormous debt to that contribution.

I hope you will know that this apology is heartfelt, genuine, and that I have an enormous personal affinity for the Jewish people in general, and those specifically in my life. The Jewish People, persecuted thorough the ages, are the first to hear God’s voice, and surely are the chosen people.

I would like to sign off with “Shalom Aleichem”—but under the circumstances, perhaps today I lose the right to use that phrase, so I will wish you all peace–Gary Oldman.

Clearly, Oldman felt the need to respond directly to the ADL, but it’s curious that his apology is directed solely at Jews, as opposed to a broader apology aimed at other people he may have offended.

During the Playboy interview, he also said he “doesn’t blame” Alec Baldwin for calling someone the three-letter “f-word” and implied that everyone use the “n-word” in private. Not to mention what he said about Pelosi. Will apologies to gays, blacks and women come next?