Gawker Needs Exactly 2,000 Dollars’ Worth Of Your Help 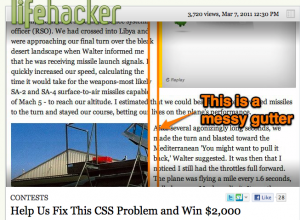 Today, Gawker Media’s Lifehacker site announced that $2,000 would be awarded to whomever could come up with a solution for a stubborn kink in the blog network’s much talked-about redesign. You might remember that, last week, we reported on a memo sent by Gawker founder Nick Denton, basically admitting to staffers that the site’s new look and navigation wasn’t all they’d hoped it would be. So, it seems, they’re now turning to their readers for help – the very readers, it should be pointed out, who have expressed feeling increasingly ignored or undervalued by Gawker, if the sentiments in this comments thread are anything to go by.

Here’s the specific issue with which Gawker’s tech team is wrestling:

The problem boils down to this: Our layout consists of a 620-pixel content div, inside of which we need two 300-pixel columns for images and ads that can float left and right, with a 20-pixel gutter between them. The problem is this:

When the 20px gutter is there, the image won’t float next to the ad, so if an image appears in the flow next to the advertisement, it’s pushed down below the ad. The designers at Gawker who are working on this are stumped. The only partial solution they’ve found involves creating shims using empty divs, but it’s not a solution we’re happy with.

On the one hand, it’s nice to see a blog reaching out to a community for help, because it shows not only a sense of humility (never underestimate the value of a well-placed admission of failure or realization of a misstep on the internet), but also a sense of value and respect for one’s readership. However, if formerly loyal commenters of blogs like Gawker and iO9 feel like they’ve been cast aside, what incentive do they have to help out at this point? Is this a case of biting the hand that feeds, then asking that hand to… come up with an appropriate end to this metaphor?

So. Any suggestions for getting Gawker out of the gutter?