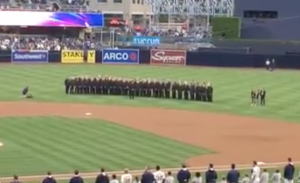 The San Diego Padres are working to offer apologies after an “error” this weekend led to the humiliation of the gay men’s choir they invited to sing the Star Spangled Banner.

As part of Petco Park’s “Pride Night” festivities on Saturday, the team asked the San Diego Gay Men’s Chorus to sing the National Anthem just before their game against the Los Angeles Dodgers. The stadium does not always have the anthem performed live, but the choir agreed to give a recording of the song and make an appearance while it played on the PA system.

Unfortunately, when the choir members took their positions on the field, they were surprised when it was a recording of a woman singing the anthem that was being played throughout the stadium.

The choir remained where they were throughout the song, but they posted on Facebook that the snafu was an absolute “humiliation” that was accompanied by homophobic slurs from the audience as they left the field.

The Padres responded to the choir’s complaints by explaining that the mess-up occurred due to a mistake in the stadium’s control room:

Statement from the #Padres regarding tonight's National Anthem: pic.twitter.com/KAKUAjlg6W

When the choir found the short apology to be less than satisfactory, the Padres released a second statement inviting them back and promising they were looking into the incident.

Statement from the #Padres regarding last night's National Anthem: pic.twitter.com/xBlT6WdPa1