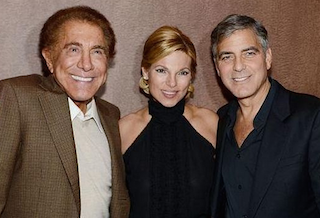 The Las Vegas Review-Journal posted a scoop Tuesday night about an allegedly explosive dinner conversation actor George Clooney had with hotel mogul and GOP donor Steve Wynn a couple of weeks ago at one of Wynn’s hotels. Clooney and Wynn offered up two very different accounts about what happened at the end of the meal during a discussion about President Barack Obama and the Affordable Care Act.

“He called the president an asshole … that is a fact … I said the President was my longtime friend and then he said ‘your friend is an asshole.’ … At that point I told Steve that HE was an asshole and I wasn’t going to sit at his table while he was being such a jackass.

And I walked out. There were obviously quite a few more adjectives and adverbs used by both of us. Those are all the facts. It had nothing to do with politics and everything to do with character.”

When he’s drinking, he considers himself a close personal buddy of the president.

He got up and said, ‘I don’t have to listen to this (expletive) stuff. The only person who got excited at the table was George, and he ran off to another bar.

Clooney’s fun to be with when he’s sober. If you have a chance to drink with him, you want to get there early, and don’t stay late.

Everybody who’s in my business, the casino business, knows to take actors with a grain of salt.”

While Clooney admitted that he let his anger get the better of him over the issue, Wynn portrayed the situation as one in which Clooney acted irrationally and he was perfectly calm.