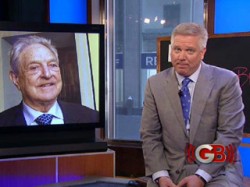 Well this is one way to respond to Glenn Beck. The New York Times just broke the story that very rich person George Soros is donating $1million to Media Matters “in an effort to more widely publicize the challenge Fox News poses to civil and informed discourse in our democracy.” Also because “recent evidence suggesting that the incendiary rhetoric of Fox News hosts may incite violence.” Recent evidence is presumably Media Matters recent campaign to prove that Glenn Beck is responsible for Byron Williams plan to attack workers at the American Civil Liberties Union and the Tides Foundation.

Here is the statement from George Soros:

Despite repeated assertions to the contrary by various Fox News commentators, I have not to date been a funder of Media Matters. However, in view of recent evidence suggesting that the incendiary rhetoric of Fox News hosts may incite violence, I have now decided to support the organization. Media Matters is one of the few groups that attempts to hold Fox News accountable for the false and misleading information they so often broadcast. I am supporting Media Matters in an effort to more widely publicize the challenge Fox News poses to civil and informed discourse in our democracy.

As the NYT (and frequently, Glenn Beck) points out Soros has long been rumored to be the money behind Media Matter even though officials there “regularly denied that they had ever taken money from Mr. Soros” something Soros again denies in his statement. However, Politico notes that Media Matters “has received funding from or formed partnerships with several groups that Soros funds. These include the Tides Foundation, Democracy Alliance, Moveon.org and the Center for American Progress.”

Judging from the tone of Soros’ statement and the fact that $1million does not go as far as it used to (nor will it presumably put much of a dent in Soros’ bank account) one imagines this is more of a symbolic gesture than anything else. A sample of what Soros is ‘challenging’ below. Also the statement from Media Matters founder David Brock.

From the moment in early 2009 that Roger Ailes enlisted Glenn Beck to the Fox News Channel’s new agenda — a battle to overturn the 2008 election results that Ailes likened to the “The Alamo” — Fox has transformed itself into a 24-7 GOP attack machine, dividing Americans through fear-mongering and falsehoods and undermining the legitimacy of our government for partisan political ends. Worse still, in recent months, Fox has allowed Glenn Beck’s show to become a out-of-control vehicle for the potential incitement of domestic terrorism. No American should be quiet about these developments — the degradation of our media and the reckless endangerment of innocent lives. George Soros, a philanthropist of the highest integrity, unfortunately knows first-hand what it’s like to be grotesquely caricatured and flatly lied about on Fox. Media Matters is grateful that he has decided to lend his voice and support our goal of greater journalistic accuracy and accountability. We are especially pleased that in this moment of hidden right-wing billionaire money corrupting our democracy, Mr. Soros, upon deciding to support our efforts, quickly and transparently has made that support public.