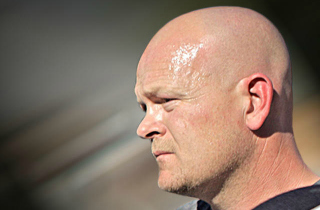 Ohio Republican congressional candidate Samuel Wurzelbacher, famously known from the 2008 election cycle as “Joe the Plumber,” appeared at a fundraiser for Arizona Republican state senate candidate Lori Klein this past weekend and said that the solution to America’s immigration problem is to build a fence, ramp up border security’s presence and have them “start shooting.”

Friday evening during the dinner event attended by other committed anti-illegal immigration activists like Maricopa County Sheriff Joe Arpaio, Wurzelbacher said that “For years I’ve said, you know, put a damn fence on the border going to Mexico and start shooting. I’m running for Congress and that should be a bad thing to say. But you know what, it’s how I feel — I want my borders protected, I’m very very adamant about that.”

Apparently any trepidations about saying such things while running for office went out the window the following day, as Wurzelbacher made a similar comment during an outdoor rally for Klein:

Wurzelbacher’s Democratic congressional opponent, incumbent Rep. Marcy Kaptur seized upon the quotes, issuing a statement to The Huffington Post: “Joe the Plumber’s comments have no place in a civil society…He should take back his words and apologize to everyone who respects life, the Constitution and the rule of law.”