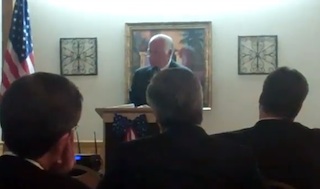 First they came for the smokers and asked them to smoke in designated patio areas and I didn’t speak out because I wasn’t a smoker. Then they came and systematically slaughtered all the Jews.

That appears to be the line of thought taken by Republican Senatorial candidate John Raese who is currently taking some heat after he compared a cigarette ban to the actions of some other historical figure. You might have heard of him; Adolf Hitler?

So, how did Raese take his place as a further statistic in proving Godwin’s Law? Well, last month, the Monongalia County Health Department became the latest county in West Virginia to enact a ban on smoking inside restaurants, bars, and other establishments. Naturally, this reminded Raese of stuff the Nazis did and he explained his theory in a recent dinner he spoke at.

But in Monongalia County now, I have to put a huge sticker on my buildings to say this is a smoke free environment. This is brought to you by the government of Monongalia County. Ok? Remember Hitler used to put Star of David on everybody’s lapel, remember that? Same thing.”

The good folks at Politico, contacted Raese and he doubled down on the comparison.

“No, this is not a standard line, nor a misstatement. It is a loss of freedom. As Ronald Reagan once said, there is no such thing as partial freedom, there is only freedom.”

Here’s an interesting fact for you; Did you know that Nazi Germany actually was the first society in modern times to enact an anti-smoking campaign? It’s true! So, Raese could have easily made a completely accurate statement if he had compared Monongalia County’s treatment of smokers to Hitler’s treatment of…smokers. Their treatment of Jews? Not so much.

Looks like someone needs a trip to Pumpernickel Boulevard…