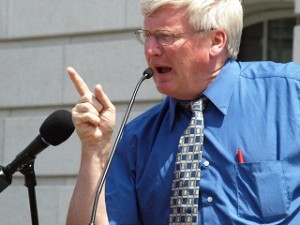 Non-married parents are under attack in Wisconsin as a bill labeling single parenthood as a “contributing factor to child abuse and neglect” was introduced.

Wisconsin Senator Glenn Grothman (R-West Bend) is the main lawmaker behind Senate Bill 507, which demands that the Child Abuse and Neglect Board focus on nonmarital parenthood as a facilitator of child abuse. While the bill doesn’t label single parenthood as the cause of child abuse, SB507 is worded in a way that can suggest otherwise.

This is especially apparent in Sections 1 and 2 of SB507, which call for dissemination of information and education about child abuse with special emphasis on single parenthood’s role:

“Section 1. 48.982 (2) (g) 2. of the statutes is amended to read: 48.982 (2) (g) 2. Promote statewide educational and public awareness campaigns and materials for the purpose of developing public awareness of the problems of child abuse and neglect. In promoting those campaigns and materials, the board shall emphasize nonmarital parenthood as a contributing factor to child abuse and neglect.

Section 2. 48.982 (2) (g) 4. of the statutes is amended to read: 48.982 (2) (g) 4. Disseminate information about the problems of and methods of preventing child abuse and neglect to the public and to organizations concerned with those problems. In disseminating that information, the board shall emphasize nonmarital parenthood as a contributing factor to child abuse and neglect.”

Critics of the bill have suggested that SB507 unfairly targets non-married parents without taking into account that they can also provide the healthy relationships and environment necessary for a child’s upbringing. Many have also criticized the bill as an attack on women’s rights, as Rep. Chris Taylor (D-Madison) has done by stating that what the bill “does is call out and chastise women who have babies and are unmarried.

The outcome of SB507 is still unclear as the bill is undergoing debate. For now, the Wisconsin State Legislature has posted the bill online for public viewing.