Gov. Scott Totally Overhauled FL’s Death Penalty but What About the Hundreds On Death Row?

Gov. Scott Totally Overhauled FL’s Death Penalty but What About the Hundreds On Death Row? 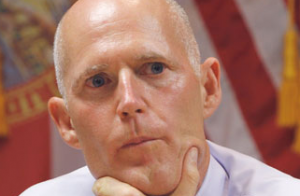 The death penalty is a hotly debated topic in today’s current events. Recall that Matthew Dowd said, “Twenty years from now, people that are for the death penalty are going to be in the same place as people that are against gay marriage. The death penalty is going to go the way of opposition to gay marriage.” Late Supreme Court Justice Antonin Scalia fought with Stephen Breyer on the issue, too. Meanwhile, Donald Trump has sworn that if he is elected to the presidency, he will make sure every “cop killer” is sentenced to death.

In between the soundbites from pundits and politicians, someone somewhere actually got something done: state congresspeople and senators from Florida passed a death penalty reform law with a wide bipartisan margin, according to The Washington Post.

Until a ruling by the Supreme Court in January deeming the practice unconstituional, Florida’s convicted offenders were sentenced to death by a judge, not a jury. Since Governor Rick Scott signed into law the bill that requires a jury to unanimously affirm that there are “aggravating factors” making a person eligible to be put to death, questions have arisen about what should be done with the nearly 400 people in that state who are currently waiting on Death Row.

Slate reported that there is a case waiting to be heard by Florida’s Supreme Court that will decide the fate of the 389 people who were sentenced prior to the creation of the new law. Attorney’s for Florida are planning to argue that even the ruling from SCOTUS does not invalidate the sentences of those on Death Row.

In the case that appeared before the nation’s highest court, there was a question of “harmless error,’ meaning that it is hard to say whether the previously-decided cases really are worthy of being invalidated because juries may have still decided to sentence of offenders to death either way.

The fate of the prisoners waiting to be executed will only be known once Florida’s Supreme Court hears its case. Until then, it’s just more waiting.