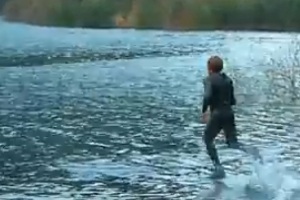 “Liquid Mountaineering” is a new term created by some European pranksters to describe a new technique they’ve pioneered for walking on water. Actually, they appear to be running on water, and they have the viral video to prove it. The well produced and vaguely believable YouTube clip that has since been revealed to be a “viral ad” for Hi-Tec, but that didn’t stop the news team at WUSA in Washington D.C., from reporting it to be true.

Sadly, the goofy and fun news clips that close each local news casts may be an endangered species. Or at least, they can no longer be taken at face value. First, take a look at how this was reported:

Turns out that the clip was actually a perfect example of “advertainment” – the faux-documentary style video funded by corporate ad dollars in hopes that some dupe would think its real.

Writing for Social Times, Megan O’Neill reveals that the video (which you can watch in its entirety below) is actually an advertisement:

A new viral video from Hi-Tec Sports has a lot of viewers scratching their heads and raising their eyebrows, asking, “Could it really be possible to walk on water?” The new viral from Hi-Tec is a documentary-style clip introducing a new sport called Liquid Mountaineering, in which athletes take a running start and run on top of water. Jesus would love this sport.

The great thing about ‘Walk On Water’ is that it is shot like a documentary and not like an advertisement. The name of the shoes isn’t even mentioned in the clip. The liquid mountaineers briefly mention that they came across some shoes “by mistake” that are totally water repellent. We see a quick money shot of water being poured on a pair of water repellent Hi-Tec shoes and go right back to the running on water. It’s just enough to get the brand name out there without being obvious about the promotional aspects of the video.

The actual viral video that started this is below: