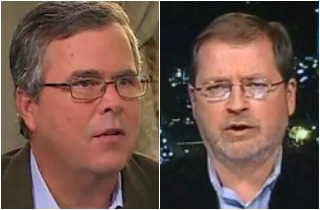 A spokeswoman for former Florida Gov. and likely GOP presidential candidate Jeb Bush has confirmed that Bush will not sign Grover Norquist‘s pledge to not raise taxes — known simply as the “anti-tax pledge.”

With a few exceptions, conservatives over the years have largely signed onto Norquist’s “Taxpayers Protection Pledge” through his lobbying group, Americans for Tax Reform. Bush — despite his father’s famous broken promise on the same issue of raising taxes — will not sign the pledge, and did not agree to similar ones during his tenure at the helm of the sunshine state.

“If Governor Bush decides to move forward, he will not sign any pledges circulated by lobbying groups,” spokeswoman Kristy Campbell said in a statement to CNN. “His record on tax cuts is clear. He didn’t raise taxes.”

With that in mind, Norquist took to Twitter to troll Bush and his father:

@MattMackowiak If my Dad threw away a perfectly good presidency I would honor him by learning to avoid that mistake.

@jouteni Unforced error. He should have learned from Dad’s screw up.

@ualdrivr Good question. You might ask George H. W. Bush. He has had spare time to think about this since 1992.

@arogDC @michaelscherer Dad and brother did. He talks of pledge as if he hadn't read it. Maybe when he does?

@JoeBorn Actually, Bush said he would raise your taxes any time he wants. You are in crosshairs. Not me silly.