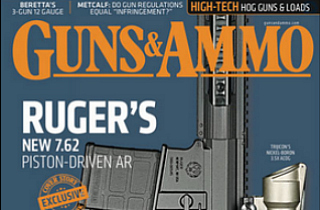 “Way too many gun owners still seem to believe that any regulation of the right to keep and bear arms is an infringement,” Metcalf wrote in the column titled “Let’s Talk Limits.” “The fact is, all constitutional rights are regulated, always have been, and need to be.”

The backlash was immense. Readers flocked to social media to decry the magazine’s editorial decision and threaten to cancel their subscriptions. All the attention resulted in the magazine’s editor Jim Bequette posting a letter online apologizing to readers and announcing that Guns & Ammo has fired the author.

“Dick Metcalf has had a long and distinguished career as a gunwriter, but his association with ‘Guns & Ammo’ has officially ended,” Bequette wrote after reassuring readers “Our commitment to the Second Amendment is unwavering.”

Bequette then turned the blame inward and personally apologized for the publishing of the editorial. “In publishing Metcalf’s column, I was untrue to that tradition, and for that I apologize,” he wrote. “His views do not represent mine — nor, most important, ‘Guns & Ammo’’s. It is very clear to me that they don’t reflect the views of our readership either.”

“I made a mistake by publishing the column,” he continued. “I thought it would generate a healthy exchange of ideas on gun rights. I miscalculated, pure and simple. I was wrong, and I ask your forgiveness.”

He then announced his own resignation earlier than anticipated. “Plans were already in place for a new editor to take the reins of ‘Guns & Ammo’ on January 1,” Bequette wrote. “However, these recent events have convinced me that I should advance that schedule immediately.”