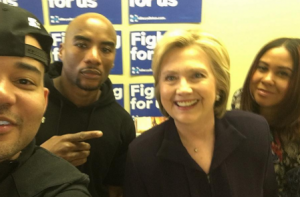 During an interview with hip-hop show The Breakfast Club Monday morning, Democratic presidential candidate Hillary Clinton told the minority hosts that she always carries a bottle of hot sauce in her purse.

“What’s something you always have with you?” asked host Angela Yee.

“Now listen, I want you to know that people are going to see this and say, ‘She’s pandering to black people,’” host Charlamagne Tha God told Clinton.

The exchange went viral on social media, as skeptical black users took to Twitter to accuse Clinton of pandering.

Please Lord, tell me I didn’t just hear @HillaryClinton talking to @cthagod about how much she likes hot sauce… pic.twitter.com/nHdDojMwsd

“@RevoltTV : Hillary Clinton says something that she always carries with her is…..hot sauce.” #REVOLTforBreakfast” pic.twitter.com/nuHlWaVIuM

why do we need to know that Hilary Clinton likes hot sauce, played dominoes in Harlem and rode the train? Black Votes Matter.

In fairness to Clinton, her predilection for spicy food is well-known, and she’s been telling interviewers that she keeps hot sauce in her bag for years.

Watch above, via The Breakfast Club.