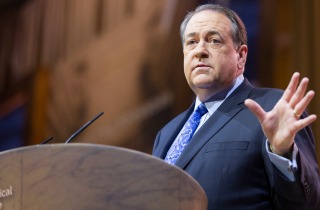 Mike Huckabee said on Friday that “enough is enough,” as he pointed to the Office of Personnel Management’s hacking as proof of President Obama‘s inability to protect America from China. “As president, I will stop Chinese cheating, hold China accountable, and never, ever apologize for protecting Americans,” said the 2016 Republican hopeful. On Monday, Huckabee proposed his solution to the problem on his campaign website: “Time To Hack China Back”

“The way you deal with a bully on the playground is to punch them in the face and put them on the ground” said Huckabee, because “the only thing they respect is power.”

Rep. Mike McCaul, chairman of the House Homeland Security committee, previously announced his suspicions of China being responsible for the attacks that stole sensitive information from 4 million federal employees. Amongst Huckabee’s list of suggested retaliations were the hacking of party leaders’ cell phones, wiping out major computer systems, and publicly humiliating Chinese families for political corruption:

“The response and retaliation to this behavior is simple-America should hack the Chinese government. When you tolerate bad behavior and bullying, you get more of it. China’s attack against four million Americans is the the largest theft of government data in our nation’s history.”

Huckabee also took a moment to bash the Obama Administration for wiretapping allies like German Chancellor Angela Merkel, while hesitating to “wake up and defend America.” “If the Chinese attacked a military base or government facility, the U.S. would respond in-kind. A cyber attack against America is no different.”