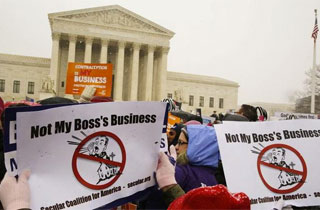 The narrow ruling of Burwell v. Hobby Lobby targeted, and essentially destroyed, the power of the contraception mandate over closely-held corporations. While conservatives celebrated, liberal pundits were outraged and thunderstruck by what they perceived to be a narrow but destructive ruling against contraceptive rights for women:

I'm going to go find my sanity in Ginsburg's dissent.

The Supreme Court #HobbyLobby ruling proves once again that Scalia Law is a lot like Sharia Law.

BTW: "Closely held" is a farce. Up to 100 owners. Basically anything not publicly traded.

When all the #HobbyLobby celebrants are holding signs that say "Ban Abortion" it is hard to think of this SCOTUS act as a narrow decision.

#SCOTUS ruling on #HobbyLobby is wrong! Your Boss will now get in your personal business. I've lost faith in the Supreme Court.

OK, but what about blood transfusions for sluts?

"Yes, corporations can play Mario Kart," wrote Alito in his concurrence. "Also they don't have to clean their rooms if they don't want to"

all 5 in Harris majority are, naturally, men. all 4 dissenting include the women justices. what a hilarious caricature SCOTUS is.

Politicians weighed in too:

Can't believe we live in a world where we'd even consider letting big corps deny women access to basic care based on vague moral objections.