Is Ironic Detachment To Blame for Rebecca Black’s Massive ‘Popularity’? 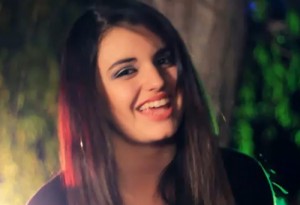 As 13-year-old singer Rebecca Black‘s Friday video racks up YouTube clicks – and Black reportedly earns loads of cash for her surprising hit song – we’re left to wonder about what Black’s story says about the music industry, the Internet, and us. Ark Music Factory, the company behind Black and other young stars, should be thrilled with all the attention, says Rhodri Marsden in The Independent, since their “whole business model is about reaction, not content.” But they have virtually “disappeared” from the spotlight faced with the inevitable backlash, which is “baffling – like pretty much everything connected to the Friday phenomenon.”

What else are people saying? Here, a roundup of the best takes about the budding star:

Black’s being exploited: This “inane, illegally catchy ditty sung in an oddly detached monotone,” has found an audience, says Michael Cragg in The Guardian. But there is an “unfortunate outcome of all this:” Black is learning that, thanks to her management company, “being a pop star isn’t just about having a catchy song and a cheap-looking video.” She must endure online abuse and “awkward interviews.” While we laugh at Black, we should also wonder if “something slightly more siniste” is going on “involving a self-styled ‘music factory’ and some misplaced dreams.”

Welcome to the digital era of music: “There is nothing new about the Rebecca Black phenomenon, except perhaps that it has happened so fast,” says Neil McCormick in The Telegraph. “Pop has always had a bulletin board quality, but the technology of the internet means fads and fancies are operating at a hyper accelerated pace, where instant responses really are instant.” Her fame is really about the power of “mass attention” to get people “briefly congregating at one spot before dispersing.”

She’s just the latest joke: Black is just one example of “the reliably sadistic appeal of the FAIL, upon which both the Internet and ‘America’s Funniest Home Videos’ were built,” says Mary Elizabeth Williams at Salon. “But there’s more to it than the spectacle of delusion. Every time someone gets famous for being horrible, that awful success sends a message to all the other no-talents waiting in the wings.” Remember when we embraced talent instead?

This is our world now: “This is a story made for finger-pointing — at Black for her perceived poor performance, at her mother for poor judgment, at Ark Music Factory for its artistic cynicism and flagrant opportunism,” says Meghan Daum in the Los Angeles Times. However, it’s not necessarily such a bad thing for Black; it just means accepting that “being extremely popular is now basically the same thing as being extremely unpopular.” And it will surely take some getting used to. In the past “the forum for anonymous public opinion was the high school bathroom wall, now the whole world is essentially a bathroom wall.”

And in the event that you want to consume the manufactured pop confection that made Black what she is today, please “enjoy”: