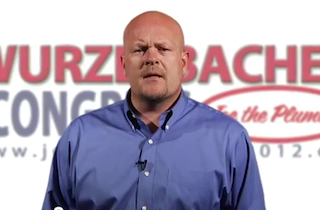 Joe Wurzelbacher, better known by his nom de McCain “Joe the Plumber,” published an open letter Tuesday morning to the families of the Isla vista shooting victims, with a special message to Richard Martinez, who excoriated the NRA and congressional members for ignoring the problem of gun violence: “Your dead kids don’t trump my Constitutional rights.”

“There are no critical words for a grieving father,” Wurzelbacher wrote. “He can say whatever he wants and blame whoever he’d like – it’s okay by me. You can’t take a step in his shoes – at least I can’t. But the words and images of Mr. Martinez blaming ‘the proliferation of guns’, lobbyists, politicians, etc.; will be exploited by gun-grab extremists as are all tragedies involving gun violence and the mentally ill by the anti-Second Amendment Left.”

“Mr. Martinez and anyone calling for more restrictions on American’s rights need to back off and stop playing into the hands of the folks who merely capitalize on these horrific events for their own political ends,” Wurzelbacher continued. “I cannot begin to imagine the pain you are going through, having had your child taken away from you. However, any feelings you have toward my rights being taken away from me, lose those.”

Wurzelbacher also took shots at Democrats and lambasted the “mainstream media” for allegedly hyping shooters as tea party Christians. “We still have the Right to Bear Arms and I intend to continue to speak out for that right, and against those who would restrict it – even in the face of this horrible incident by this sad and insane individual,” he wrote. “I almost said ‘Obama Voter’ but I’m waiting for it to be official.”