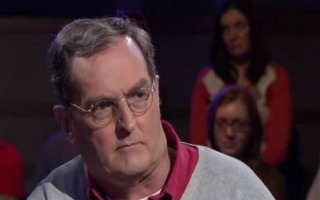 In a week of political coming outs, recently defrocked National Review contributor John Derbyshire has had an awakening of his own – as an unapologetic white supremacist. At least, that’s the feeling I am left with after having read his latest work. And before you accuse me of expressing a hyperventilating overreaction to what could easily be interpreted as a provocative think piece if given a neutral read… well, just give it a shot. “I see no great floods into these places by refugees desperate to escape the horrors of white supremacy,” is just one of the unimpeachable conclusions Derbyshire has devised in his latest salient work.

Writing for VDARE.com, a website in which you have to click through a splash page with a content warning in order to reach their content, Derbyshire published “Who Are We? – The ‘Dissident Right’ on Thursday.

“White Nationalist,” which has a fairly healthy currency here on the Whadda-We-Call-Ourselves Right, strikes me as even more problematical. What is the nation to which “nationalist” is the referent? “White” isn’t a nation, nor likely to become one.

I don’t mind the word “white” in either of those expressions. Conservatism, Inc. or otherwise, is a white people’s movement, a scattering of outliers notwithstanding.

Derbyshire goes on to suggest that the phrase “white supremacy” is, essentially, redundant:

Leaving aside the intended malice, I actually think “White Supremacist” is not bad semantically. White supremacy, in the sense of a society in which key decisions are made by white Europeans, is one of the better arrangements History has come up with. There have of course been some blots on the record, but I don’t see how it can be denied that net-net, white Europeans have made a better job of running fair and stable societies than has any other group.

VDARE is raising tax deductible donations for Derbyshire’s chemotherapy treatments, which Gawker notes is admirable. However, they note in callous Gawker style, that they support this effort only to postpone their having to eulogize him should he pass away.

If anything, this post proves that it was not short sighted of National Review editor Rich Lowry to end their relationship with Derbyshire in early April after he published a disturbing diatribe on the inherent intellectual deficiencies with which African Americans wrestle in a site called Taki Mag.