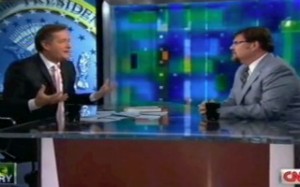 In a scene reminiscent of CNN host Piers Morgan’s on-air feud with author and liberal commentator Touré, Morgan and conservative columnist and author Jonah Goldberg’s battle on CNN on Monday night spilled over into the twitterverse on Tuesday with both Goldberg and Morgan firing barbs at one another.

Goldberg, still fuming from the interview he had with Morgan that he described as a “shameful spectacle” on National Review’s “The Corner” blog, Goldberg took to Twitter at 11 p.m. EST on Monday night to challenge Morgan on his facts:

Hey @piersmorgan. Politifact backs me up (not that I thought there was chance you had it right). politifact.com/truth-o-meter/…

Morgan, for his part, was not having any of it:

Stop bleating like an overgrown baby @JonahNRO – if you think I was unfair to you, come back and try your luck again. #CNN

Not sure you did, actually RT @JonahNRO: Yes, but very low bar RT @LegInsurrection missed it, did u do better than Touré?

Morgan said that he thought Goldberg’s perturbation over the interview was reminiscent of Touré. However, Morgan took the opportunity to dig at Goldberg, saying that he wasn’t sure that he had even performed as well as Touré did during their highly publicized confrontation.

Poor @JonahNRO (right-wing) reminds me of @Toure (left-wing) – both claimed instant glorious victory over me, then people watched the video.

Amusing to be lectured by @JonahNRO on my ‘political bias’. The man whose book titles boast: ‘LIBERAL FASCISM’ & ‘HOW LIBERALS CHEAT’.

.@piersmorgan I would have offered you my views last night, but you were only interested in your own.

The point @JonahNRO is that not everybody who disagrees with you has to be parked instantly in the ‘Liberal Fascist Cheat’ naughty chair.

.@piersmorgan I never claimed victory, glorious or otherwise. I never saw it as a battle in the first place. You did and it showed.

This story is ongoing. More updates to this post will be published as they develop.