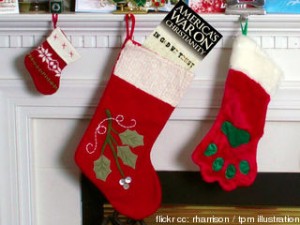 If you were looking for the perfect stocking stuffer for the non-Jews and Muslims on your holiday gift list, World Net Daily Books had just the answer with their new book America’s War on Christianity, which was released just in time for the War on Christmas.

World Net Daily was kind enough to send a review copy of the book, which author Brad O’Leary says he wrote because President Barack Obama “declared that America is not a Christian nation.”

Despite the fact that 76 percent of Americans identify themselves as Christians, O’Leary maintains there’s not only a War on Christmas, but a war on the entire religion as well.

“The Judeo-Christian vaules upon which America was founded are under attack,” the book begins. O’Leary, a WorldNet Daily columnist and right-wing radio host, writes that “the current war is divided into two camps.”

O’Leary opens his book with Obama’s visit to Georgetown University in April 2009. In what O’Leary dubs the “Georgetown Cover-up,” the White House requested that religious signage and symbols be covered up. Left out of O’Leary’s narrative: Obama quoted from Jesus’ Sermon on the Mount during that very speech.

Amongst O’Leary’s other complaints: the Capitol Visitors Center has no references to God and instead serves as a “shrine to the power of government, man, and secular causes.”

Just like many of those on Fox News, he’s also frustrated around the holiday season.

“In cities and towns across America, public nativity scenes are treated like pornography every Christmastime, and the phrase ‘Merry Christmas’ has become a veritable slur,” O’Leary writes. “Each year, dozens of communities experience ‘Baby Jesus theft,’ a literal robbing of the cradle,” he continues.

The author also rails against hate crimes laws which protect gay, lesbian, bisexual and transgender individuals from being targeted because of their sexual orientation.

“However, many refer to such a national hate/thought crimes bill as the ‘Pedophile Protection Act’ because in the process of extending special federal protection to individuals on the basis of sexual orientation and gender identity, the majority in the U.S. House has refused to exclude any of the 547 forms of sexual deviancy or ‘paraphilias’ listed by the American Psychiatric Association, including pedophilia,” O’Leary writes.

O’Leary believes that that academia and Hollywood are aligned against Christians because of movies like “The DaVinci Code.” He also takes on Jon Stewart, who he says “identifies himself as a socialist” and “likes to mock those who try to point out there’s an anti-Christian culture war going on.”

“The mainstream media believes that America must be delivered from Christianity for the good of all of us,” O’Leary writes.

This post was written by Ryan J. Reilly for Talking Points Memo and is repurposed here via a content sharing agreement.