Kasich Aide Smacks Priebus for Threatening Anti-Trump GOPers: ‘He Will Not Be Bullied’ 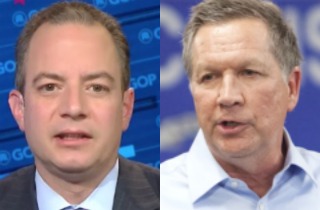 A top aide for Ohio Governor John Kasich is taking aim at Republican National Committee Chairman Reince Priebus over an apparent threat he made toward Republican officials who refuse to get in line behind Donald Trump.

During an appearance Sunday on Face the Nation, Chairman Priebus said that #NeverTrump Republicans could possibly face certain penalties if they fail to support the GOP nominee. Priebus seemed to specifically direct this message at conservatives in upcoming elections, as well as former presidential candidates who broke their pledge to swear fealty to the victor of the primaries.

In response to this apparent threat of a challenge to future bids, Kasich strategist John Weaver ripped into Priebus by playing the Kenosha card:

“The idea of a greater purpose beyond oneself may be alien to political party bosses like Reince Priebus, but it is at the center of everything Governor Kasich does. He will not be bullied by a Kenosha political operative that is unable to stand up for core principles or beliefs,” John Weaver, a top aide for Kasich said in a statement.

“In fact, Reince should be thanking the Governor for standing for an inclusive, conservative vision that can actually win a national election and improve our country. The Governor is traveling the nation supporting down ballot Republicans and preventing a potential national wipeout from occurring on Reince’s watch.”

Trump regularly slams his former opponents for breaking their pledge to support him, even though he made plenty of threats of his own to break the promise if he was ever deprived of his victory.