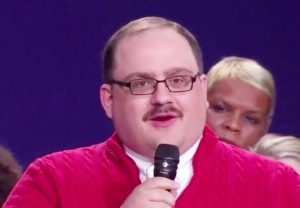 Depending on who you are and how you feel about certain issues, Ken Bone‘s 15 minutes of fame have either run out, or they just got a bit more time on the clock.

The man in the bright red sweater inexplicably captivated the nation this week, ever since he appeared at Sunday’s presidential debate to ask a question about energy policy. Last night, Bone held a Reddit AMA that offered “boneheads” a chance to reply learn about the Internet’s newest celebrity.

By and large, a lot of the conversation was fun and light-hearted, with some politics thrown in here and there

Even Snoop Dogg got in on the action:

The news hasn’t been all great, however. Bone has participated on Reddit before, and some reporters dove into his history and discovered some odd posts of his that he never bothered cleaning up.

While it can no longer be re-posted, Bone did offer some comments months ago about how George Zimmerman was “justified” in killing Trayvon Martin, even if he’s a “a big ole sh*t bird.”

Several other questionable posts came up, one of which got NSFW when Bone expressed a sexual interest in pregnant women.

So what do you think? Bad to the Bone, or is this just the next phase in his rise to fame?