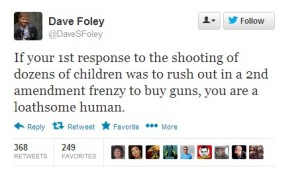 Comic actor Dave Foley, currently between hits in a career that includes legendary sketch comedy show The Kids In The Hall and the long-running NewsRadio, is the subject of conservative website Twitchy’s ire because he tweeted, among other things, that “If your 1st response to the shooting of dozens of children was to rush out in a 2nd amendment frenzy to buy guns, you are a loathsome human.”

Twitchy’s outrage is as dull as it is dull-witted, since they translated Foley’s rather narrow critique into an indictment of anyone who bought a gun after the mass shooting at Sandy Hook Elementary School, but there are a few decent points to be made here.

Foley was arguably painting with too broad a brush, even with his specific reference to “your first response.” There were, undoubtedly, many people who rushed out to buy guns out of a sincere, if irrational and misguided, desire to protect themselves from such horrors, and others who acted out of a sincere, if irrational, anxiety that the government might severely restrict gun ownership as a result of the tragedy, and if either of those was your first reaction, maybe you’re not a “loathsome human,” but you’ve got perspective issues.

However, Foley’s tweet puts me in mind of the endless news reports, in the immediate wake of the Newtown shooting, featuring gun store owners talking about demand for the Bushmaster AR-15, the exact weapon that was used in the killings. They can’t keep it on the shelves. Since then, I’ve often wondered what goes through someone’s mind when they hear that this weapon was used to gun down twenty children and six educators, and they think “I gotta get me one of them!”

I try my best to understand other points of view, even those with which I strongly disagree, but I have not been able to get my head around this one. There are many brands of AR-15, and similar, weapons, as any opponent of the assault weapons ban will tell you, so why would anyone, so soon after this tragedy, seek out that specific weapon? It’s like heading to Sur La Table for a complete set of Jeffrey Dahmer cutlery, only more monstrous. I don’t remember there being a run on white Broncos in 1994.

Most of the people who oppose sensible gun regulation are not “loathsome humans,” in my view. They’re either misinformed, and believe that current gun laws are far more strict than they are, or that the proposed regulations reach farther than they do, or misguided, and believe the false “slippery slope” arguments advanced by the National Rifle Association. Wayne LaPierre is a loathsome human because he is a self-conscious liar, and Sen. Harry Reid is currently nominated for loathsome human status, which he will secure if he refuses to allow a vote on the assault weapons ban, but most of the people, on either side of this debate, are not. It would take some convincing, however, to judge a person who ran to a gun store, after those killings, to get their own copy of the murder weapon as anything but a loathsome human.

As for Twitchy, the only thing more tired than their exhausting stream of Twitter outrage is the dull, but necessary, observation that their comprehensive monitoring of Twitter loathsomeness somehow manages to miss things like this, the former South Carolina GOP executive director who posted sick, racist, homophobic tweets during last night’s Super Bowl. Perhaps I misjudge, though. Perhaps Twitchy’s silence on the matter is sincere.