Krugman, Chait, and Frum Call the ‘Libertarian Moment’ a Load of Bollocks
WHAT ABOUT NOZICK

Krugman, Chait, and Frum Call the ‘Libertarian Moment’ a Load of Bollocks 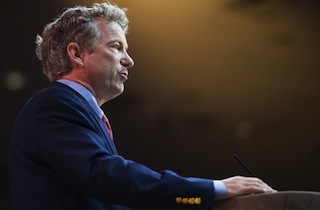 While libertarians, a group that often feels misrepresented in mainstream political discourse, were largely happy with Robert Draper’s piece in the New York Times Magazine about their moment in the sun, it didn’t take long for other columnists to call the idea of a “libertarian moment” a load of bollocks.

New York’s Jonathan Chait, New York Times’ Paul Krugman, and The Atlantic’s David Frum (stepping back from the brink) all blew raspberries at the idea that this particular cross-section of free market economics, liberal social views, and non-interventionist foreign policy was suddenly ascendent in American politics. The primary point all three pieces made: younger voters, who are supposedly ushering in the movement, are more supportive of government intervention than their elders. As Chait summed up: “That young voters actually favor ‘bigger government’ in the abstract is a sea change in generational opinion, not to mention conclusive evidence against their alleged libertarianism.”

Chait explicitly critiqued the data from libertarian magazine Reason as intentionally skewed to support the libertarian shift; in fact, Chait argued, most voters who boast to pollsters that they’re independent are just cranky partisans who fall back along ideological lines in the voting booth.

Frum, meanwhile, framed the libertarian insurgency as specific to the Republican Party, and not beneficently so: 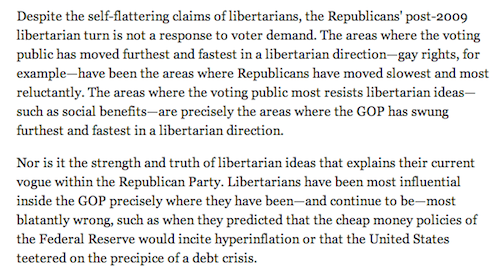 Krugman used the whole thing as a chance to reiterate the need, in his view mendaciously ignored by libertarians, for government intervention, citing Toledo’s recent water problem as a case in point: the laws that would have kept the Lake Erie clean are exactly the type opposed by kneejerk anti-government types like Erick Erickson. Erickson might not be the example of the sharp, savvy libertarian in Draper’s piece; but that, Krugman would argue, is exactly the point.