‘Let’s F*ck Some Sh*t Up!’: Wife of Wichita State Coach ‘Asked to Leave’ Her Seat For Belligerent Behavior 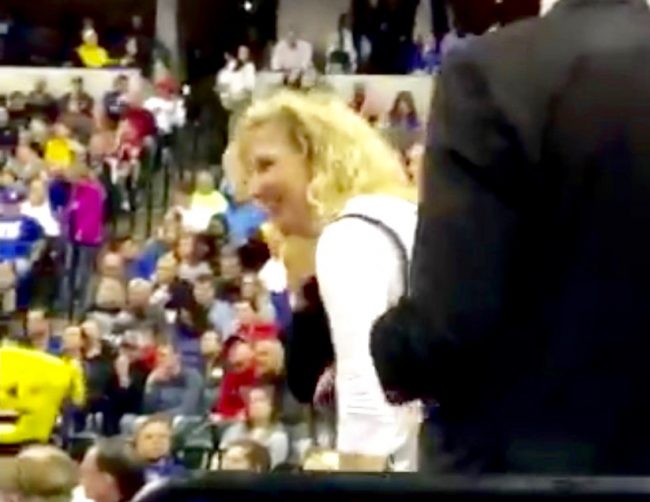 It was a close, emotional game Sunday afternoon in Indianapolis between Wichita State and Kentucky. And according to several reports, one prominent fan may have gotten a bit too into the action.

Several outlets posted photos and video of Lynn Marshall, the wife of Wichita State head coach Gregg Marshall, engaging in some spirited behavior during the game. Several reports indicated that her behavior turned belligerent, to the point where she was asked by arena security to leave her seat. And one report said that Marshall’s daughter admitted that her mom was drunk.

Gregg Marshall’s wife is the drunkest individual at Bankers Life… just said “Come On, Let’s F@&k some S@$T Up” ?

Live look at Gregg Marshall’s wife. Shockers hit a three. Climbs on a chair and waves her shirt up and down. #DrunkMomProbz pic.twitter.com/bNlJ1UXIVB

I wouldn’t have said she was drunk unless I was told so, Lynn Marshall’s daughter apologized for her mother and said “she’s just drunk”

The Associated Press reports that Lynn Marshall was asked to leave her seat by a security guard. She was later permitted to attend her husband’s postgame news conference, following Wichita State’s 65-62 loss.