Limbaugh: ‘Decades of Liberalism,’ Not 2nd Amendment, To Blame For Javon Belcher’s Murder-Suicide 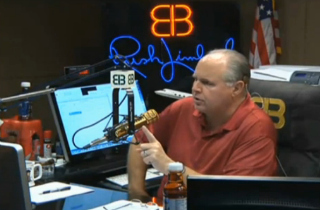 Rush Limbaugh took on the controversy surrounding NFL player Jovan Belcher‘s murder of his girlfriend and subsequent suicide last weekend and criticized what he called “the go-to liberal reaction” to re-examine American gun laws. Limbaugh implied that ‘decades of liberalism’ had damaged the ‘American family’ and said examining the “real root of such things” would make “everybody too uncomfortable to hear.”

Limbaugh expressed his view that blaming American gun laws was a “cop-out” and an “easy, lazy way” to approach the tragedy. He went on to wonder if the move away from “traditional” American values was a factor in the shootings:

“Might there have been a better outcome if there had been a marriage involved between Mr. Belcher and his girlfriend? I don’t know. All I know is that I look at all the statistics on single parenthood and children born out of wedlock and what happens to kids in those circumstances; what happens to the fathers in those circumstances. And it’s not good.”

After saying that liberals believe tradition is “old-fashioned and stodgy and is therefore the enemy,” Limbaugh wondered whether religion could have prevented Belcher’s actions: “For example, if we hadn’t taken religion out of as many lives as we apparently have, would the situation have been different? ”

Limbaugh also claimed that “we’re never get to get to the root causes of events like this” because “it might lead to charges of racism and discrimination.”

Listen to the full clip, below: