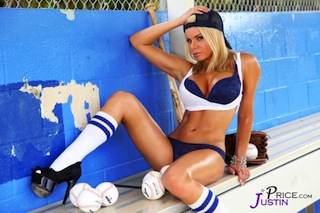 If there’s one thing we in the media know, it’s that all reporters are actually deviant exhibitionists. It’s true. None of them actually care about journalism or “the story.” They just care about parading around showing off their sexy bodies to famous people, foreign diplomats, and local police chiefs. And sports reporters are the worst. That’s why Major League Baseball has been forced to enact a new dress code keeping reporters from showing everyone their underwear.

“”We just thought it was time to get a little organized, to put it in place before there was an incident,” said committee member Phyllis Merhige, an MLB senior vice president.

“There’s no one who expects reporters to wear a suit and tie,” she said. “But with the advent of different media, there are now individuals who are not part of a bigger organization that may have a dress code.”

The media should dress “in an appropriate and professional manner” with clothing proper for a “business casual work environment” when in locker rooms, dugouts, press boxes and on the field, the new MLB guidelines say.

That may sound silly to some, but this is how the New York Times Senior Sports Editor looked when showing up to a recent Yankees game.

An MLB spokesperson told the Associated Press that this didn’t have to do with any specific incident, but there has been a lot of attention recently to the attire of reporters throughout professional sports, the situation involving the New York Jets accused of harassing a female reporter being one example.

As of yet, no other professional sports league has enacted a similar code.