Matt Stone And Trey Parker To Mediaite: Romney Would Really Like Book Of Mormon 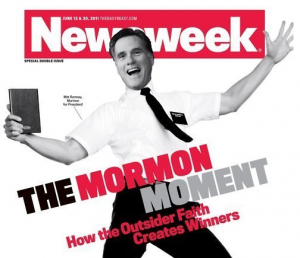 As Newsweek reports in its somewhat controversial (at least in Salt Lake City) Mitt Romney cover story, Mormons are “having a moment.” How’s that? According to Newsweek, suddenly Mormons are in key positions all over the place, from Glenn Beck (even though he’s moving out of his high profile spot on Fox and into a far-less-certain future on the web) to Romney’s emergence as an early frontrunner for the GOP nomination–and, some argue, the White House–and then there’s the musical. “Even Broadway has gotten in on the act, giving us The Book of Mormon, a big-budget musical about Mormon missionaries by South Park creators Trey Parker and Matt Stone and Avenue Q writer Robert Lopez that, with 14 nominations, is expected to clean up at the Tony Awards on June 12.”

Mediaite spoke exclusively with Parker, Stone and Lopez about the show, Romney, and Glenn Beck–a fan of Broadway who the creators hoped from the start would come out and enjoy the show. “I know Glenn Beck is a Mormon. And he loves Spiderman, said Stone. “I believe Glenn Beck would like our musical. I really believe that. He could draw a flowchart on the chalkboard.”

Stone and Lopez said the show was never intended to mock Mormons, but rather to use Mormonism as the setting for a great story. “To make a musical where we’re just going to make fun of Mormons, that doesn’t sound very fun,” said Stone. “We’re definitely going to have fun at their expense, but at the end of the day, their generosity and big-heartedness wins the day. I think Mormons are going to really like this show.”

While the Newsweek cover–which was produced with the cooperation of Book of Mormon–has sparked criticism, with National Review saying the cover “makes the GOP frontrunner look like a lunatic,” others have seen the show as a sign of acceptance. “It was wonderfully clever,” said Bob Nelson, a theater professor–and practicing Mormon–at the University of Utah. “It was witty. It was also one of the most vulgar theatrical experiences I’ve ever had. I was wincing at the same time I was laughing,” he told The Salt Lake Tribune.

And that’s fine with the guys who created South Park and Avenue Q. “The only way they wouldn’t like it, is if they don’t see it,” Lopez told Mediaite. “If Mitt Romney came and saw the show, he would really like it,” added Stone, though he doesn’t expect the candidate to take time out from the campaign trail to catch the musical. Beck, on the other hand, just might. Even if the creators of the show admit they don’t watch Beck’s show or much of any cable news at all. “I don’t really watch a lot of that stuff,” said Stone. “Maybe I watch The Daily Show and see what was on cable news.”