Media Mob Steps In It Again; Fails to Vet Britt McHenry Story in Rush to Judgment 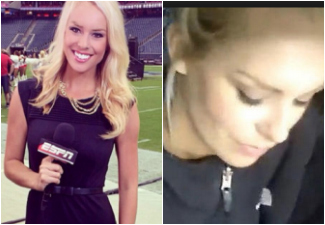 Rushing to judgment much of what online media and cable news opinion is built on these days. Exhibit A for this week is ESPN’s Britt McHenry.

Before we continue, know this: Britt McHenry absolutely deserves the suspension she’s currently serving. That’s plenty of levels of one person being mean to another, but McHenry struck the third rail of insults four times in her rant against a female employee of a tow company by hitting four special chords:

McHenry is a reporter on a national network and must know (and she certainly does now) that she needs to conduct herself appropriately and accordingly both on the air and off…it’s all part of the (morality) contract. And once she saw a camera was in play, she should have taken a walk around the block a few times to cool off instead of turning up the vitriol higher.

But something had been odd about the McHenry video from the very beginning. In it, she’s appears to be going on an uncontrollable tirade against the female employee (only known as “Gina”, single mother of three) without responding in any way. Almost nobody in cable news or online or in the friendly world of social media bothered to question how anyone could be berated in such fashion without responding in kind. Another aspect that wasn’t even broached was the video clearly being edited via flash edits, which is often used in broadcast circles to marry different sound bites from one person without awkward jump cuts throughout (the flashes separate the bites while not breaking up the overall narrative).

Well…it turns out the McHenry video was heavily edited by the tow company, which (given McHenry’s responses) either means the insults were likely a two-way street…or it sets the situation back to “We Just Don’t Know What Happened” status. Can we please see the whole video with edits?

No matter…the social media mob has spoken and #firebritt predictably began trending on Twitter. Lindsay Lohan’s career was single-handedly resurrected by all the comparisons to Mean Girls alone (Side Note: Rachel McAdams really carried the movie). Deadspin even dug into the 28-year-old’s sordid past of not being nice to people courtesy of this hilarious headline: ESPN Reporter Britt McHenry Has A History Of Being Rude As Hell. The irony, of course, is that Deadspin’s entire business model throughout its history has been to be rude to other people. Several ESPN employees–speaking off the record–say they want McHenry fired (because The Worldwide Leader is always full of fine actors).

But let’s say the video wasn’t edited. Based on her comments alone, should Britt McHenry be fired? The perspective here is absolutely not, and here’s why:

-She wasn’t on the air

-She wasn’t doing anything illegal

-Yes, her comments were mean…but they weren’t racial or ethnic slurs

Termination? For losing it with a towing company? If that was the standard nationwide when including Parking Enforcement Officers, unemployment would be at 50 percent.

Britt McHenry will be on exceptional behavior moving forward. A week’s suspension and all the negative press and online sentiment will ensure that.

But almost the entire media should consider taking a mandatory vacation as well for (once again) not even bothering to check to see if there was another side of the story before rushing to judgment.