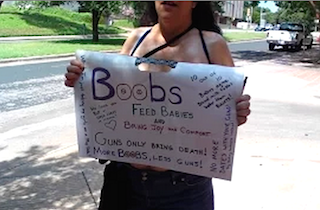 The Texas open carry movement has a new group of adversaries, and they left their shirts at home. Over the weekend, the “Come And Take It Texas” organization posted multiple videos on YouTube showing their members’ confrontations with a small number of women who apparently took to the streets without their tops, carrying signs that featured slogans like “More boobs, less guns!”

The women, referring to as “Skanky Topless Libtards” by the gun rights group, can be seen asking the men to stop displaying their oversized guns in public, saying they have just as much right public nudity as the men have to publicly bare arms — but that doesn’t mean everyone wants to see them. Another sign read, “You realize that everyone thinks you’re overcompensating for your teeny tiny ‘gun’ right?”

Conservative pundit Dana Loesch called attention to the protest on Twitter, urging the “gross” women to “put a top on”:

The article to which she linked indicated that the women were associated with Moms Demand Action, the Michael Bloomberg-affliated gun control group. That group’s founder Shannon Watts quickly distanced her group from the women, claiming there was no connection to be made:

Lol: Nice try. Not our moms, not even members. "@DLoesch: Gross. Put a top on. http://t.co/dzptLBUN3M h/t @EricReedGRAA”

One of the two women seen in the videos, Austin’s Phyllis Perpendicula Masters, confirmed on her Facebook page that she is not affiliated with MDA, nor has she ever heard of it, asking, “What the fuck is that?”