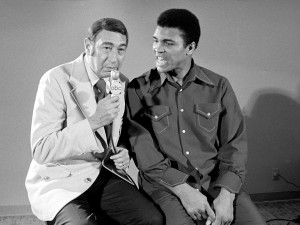 When talking about public figures who could mesmerize the media like nothing we ever saw nor will ever see — even in a time of Trump — nobody can touch Muhammad Ali of the 60s and 70s.

Ali died yesterday at the age of 74. But it was Parkinson’s that took Ali’s ability to communicate at an unprecedented, unmatched stratosphere starting about 35 years ago. The champ should have walked away after the Rumble in the Jungle — one of the greatest upsets in any sport — when he somehow knocked out the thought-to-be-unbeatable George Foreman in the eighth after dangerously playing rope-a-dope for seven rounds prior. If he walked away then — he may have avoided becoming the Ali we’ve seen over the past three decades, who basically whispered or pointed to communicate… all while his hands shook almost violently in the process. But there were those fights against Leon Spinks (losing the title before gaining it back in the rematch) and that completely ill-advised one Ali — who was generous to a point of being practically broke — against a young Larry Holmes in 1981, who gave him a beating that he seemingly never recovered from.

When Cassius Clay (Ali’s birth name before converting to Islam) first burst onto the scene, it happened to coincide with the explosion of television being a common, central item in many American homes. The year was 1964. Clay was just 22. The champ at the time was Sonny Liston –
… not exactly known for juicy soundbites, not remotely close. But despite his muted persona, Liston was a damn good fighter to the tune of being a 7-1 favorite to beat the inexperienced Clay. The challenger wasn’t impressed, shocking everyone by telling reporters this before the fight:

And the challenger kept talking. And talking. Think of Trump’s bravado today, multiply it by 10, make it periodically rhyme and actually be oftentimes charming, witty, sometimes mean, and you had Clay, also appropriately nicknamed the Louisville Lip. Find me an athlete — hell — any public figure today who could reel off a poem like the one he did before the Liston fight:

“Clay comes out to meet Liston and Liston starts to retreat,
if Liston goes back an inch farther he’ll end up in a ringside seat.
Clay swings with his left, Clay swings with his right,
Look at young Cassius carry the fight
Liston keeps backing, but there’s not enough room,
It’s a matter of time till Clay lowers the boom.
Now Clay lands with a right, what a beautiful swing,
And the punch raises the Bear clean out of the ring.
Liston is still rising and the ref wears a frown,
For he can’t start counting till Sonny goes down.
Now Liston is disappearing from view, the crowd is going frantic,
But radar stations have picked him up, somewhere over the Atlantic.
Who would have thought when they came to the fight?
That they’d witness the launching of a human satellite.
Yes the crowd did not dream, when they put up the money,
That they would see a total eclipse of the Sonny.”

Are you kidding me? It’s just unthinkable to hear any athlete, any public figure, sing something like that off today. And again, he was just 22 at the time. And to have the ability to back all of this up was even more remarkable. Clay went on the win the title by knocking out Liston early and would become instantly iconic from there. ABC’s Howard Cosell — an icon himself in that he once was voted in a (TV Guide) poll for being the most liked and disliked man in America simultaneously — quickly forged an all-access relationship with Ali, and was so close he was practically part of his entourage. This didn’t stop Cosell from asking tough questions, of course, to which Ali always had the perfect answer.

Before the Foreman fight, Cosell — who predicted (like practically everyone else) that Ali would lose to the bigger, younger, stronger champ — declared at a crowded press conference he wasn’t the man he was ten years ago in asking him how he ever had a shot of winning… to which The Lip responded:

But know this: Despite the media hanging on his ever word, Ali wasn’t exactly embraced and beloved by Americans as a whole. His protest of the Vietman War and draft because of his religious beliefs (he converted to Islam and forged a relationship with Malcolm X after winning the title) was highly controversial to the point he was stripped of said title. His treatment of Joe Frazier, calling him an “Uncle Tom” and “gorilla”, would have broken Twitter if it existed back in the 70s. Frazier carried his hatred of Ali for those words to his grave, and rightly so. Summary: When speaking as candidly as Ali did over the years — with no filter along the way — you’re going to rub more than a few people the wrong way.

In the end, Ali became a sympathetic figure and the nostalgia for all that bravado and boasting and drama and winning eventually won the day. Every major “most influential figures of the 20th Century” list puts him near the top. Even years after leaving the public scene, he was still the one of the most (if not the most) recognizable person on the planet… and will be long, long after his death today.

I could go on forever here, so here’s an idea: There are collectively dozens of books, documentaries and movies made about Muhammad Ali. If looking to learn more about the man in his prime and just how much influence and attention he attracted, the recommendation here is to rent 1996’s When We Were Kings… a tremendous documentary of what led up to and included the 1974 fight between Ali and Foreman in Africa.

Muhammad Ali has passed away at age 74. The retrospectives will rightly be everywhere throughout the weekend.

They’ll never be anyone like him in the ring again.

And they’ll especially never be anyone — sports, politics, celebrity or otherwise — in front of microphone, either.