Navy SEAL Who Founded Anti-Obama PAC: ‘I Have To Admit I’m A Birther’

Navy SEAL Who Founded Anti-Obama PAC: ‘I Have To Admit I’m A Birther’ 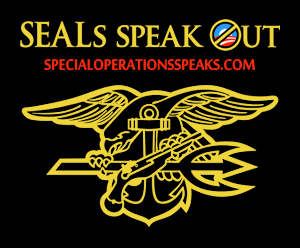 Larry Bailey — the former Navy SEAL who founded Special Operations Speaks (SOS), the PAC critical of the president’s treatment of the military — isn’t shy when expressing his sentiments about President Barack Obama. In an interview with Foreign Policy magazine, Bailey characterizes Obama as a socialist, with a communist upbringing, who was not born in the United States.

“I have to admit that I’m a Birther,” the veteran said. “If there were a jury of 12 good men and women and the evidence were placed before them, there would be absolutely no question Barack Obama was not born where he said he was and is not who he says he is.”

Bailey is the founder of SOS, a group whose self-proclaimed mission noted “with dismay and deep alarm the recent stream of highly damaging leaks of information about various aspects of America’s shadow war in the overall War on Terror.” Not to be confused with the Special Operations OPSEC Education Fund, a different group of former Navy SEALS that shares similar criticisms of the president.

The interview noted that Bailey “says he has no problem admitting that he is against Obama’s politics, personality, and believes that America’s current president is lying about his origins.” On top of questioning the president’s birthplace, Bailey doesn’t believe the president is the son of Barack Obama, Sr., ascribing instead to the conspiracy theory that he is the love child of Ann Dunham and writer Frank Marshall Davis.

While SOS’s self-proclaimed mission on its website focuses on the issue of the White House handling of national security leaks, Bailey also admitted that he simply doesn’t like the president, going on to elaborate on his belief of Obama’s socialist views:

“Barack Obama’s a born red-diaper baby. He’s a socialist. His beliefs are the very antithesis of my beliefs. As far as I am concerned he is one of the most unlikeable and unprepared politicians we’ve ever had,” Bailey said. “I don’t like him because he believes that America is responsible for most of the problems in the world and he wants to cut her down to size.”

Along the same blunt vein, the veteran stated that his effort with SOS is directly related to his desire to see Obama leave the White House. “I had an idea that we could lend a hand to the effort of getting the White House expunged of what’s there now and elect someone more to my liking,” he said.

He added that the “Obama administration and the liberal progressive path that our country is going down is going to be nothing less than disastrous for our civilization.”

But SOS isn’t Bailey’s first such effort. In 2004, he was involved with Vietnam Vets for the Truth, a group that worked with Swift Boat Veterans for the Truth, to level attacks on then-candidate John Kerry‘s military record. Foreign Policy notes that together the two groups organized a “Kerry Lied” rally on Capitol Hill that drew in 5,000 attendees.

Currently Bailey’s focused on SOS’ “Operation Street Corner” initiative, which seeks to rally thousands to take to the streets in protest of Obama’s treatment of the military. Thus far, the initiative has 30 coordinators among 20 states.