NEA Puts Out Statement Distancing Itself from Controversial Shakespeare Production 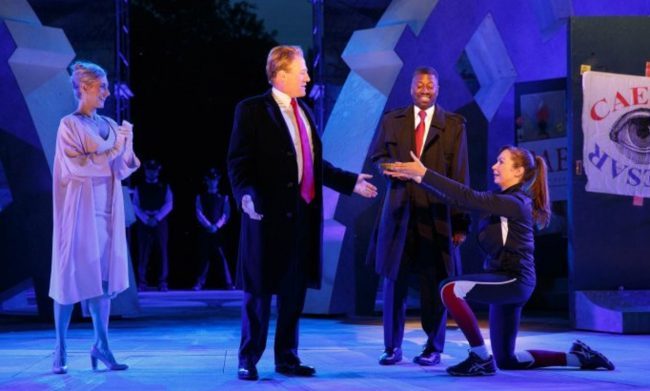 A government agency is going out of its way to make clear it has nothing to do with a controversial New York theater production.

The National Endowment for the Arts is currently featuring a pop-up message on its homepage, which informs visitors, “No taxpayer dollars support Shakespeare in the Park’s production of Julius Caesar.” 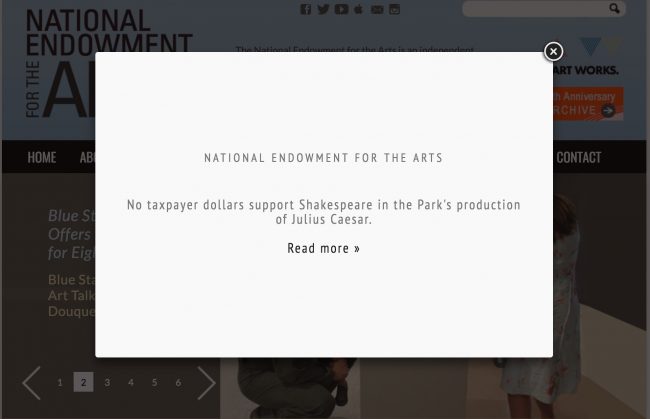 In the production, Caesar is portrayed as President Donald Trump. And as followers of the Bard know, Caesar is brutally murdered in the play, and the Central Park version reportedly depicts Caesar’s demise in graphic fashion.

The National Endowment for the Arts, which previously donated to Shakespeare in the Park, wanted to inform the public that tax money was not committed to this production. The message on their site reads as follows:

The National Endowment for the Arts makes grants to nonprofit organizations for specific projects. In the past, the New York Shakespeare Festival has received project-based NEA grants to support performances of Shakespeare in the Park by the Public Theater. However, no NEA funds have been awarded to support this summer’s Shakespeare in the Park production of Julius Caesar and there are no NEA funds supporting the New York State Council on the Arts’ grant to Public Theater or its performances.

The production has come under pressure from sponsors, with Delta and Bank of America among those pulling out. Delta withdrew its sponsorship of The Public Theater, which staged the show. Broadway World reports that the airline sponsored The Guthrie Theater in Minnesota in 2012 when one of their studios staged Caesar with then-President Barack Obama as the title character. To be clear, Delta did not directly sponsor that company’s Caesar, but then, the Public Theater puts on a number of productions throughout New York City.