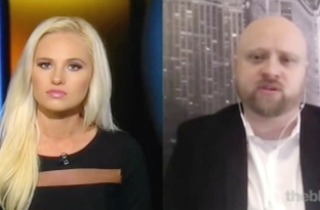 Conservative firebrand Tomi Lahren faced off with RedState’s Ben Howe on Monday night, where they discussed why the #NeverTrump movement could keep opposing Donald Trump at the risk of letting Hillary Clinton win the election.

Howe has been clear about his dislike for Trump in the past, and he told Lahren that he fears that Trump will not only lose, but that his takeover of the GOP will have disastrous consequences for the future of conservatism. Lahren, who has been quite pro-Trump in recent weeks, said she’s exasperated that anti-Trumpers aren’t more concerned about Democrats regaining control of Congress.

Howe stated he finds Trump more dangerous than Clinton, saying that while both are corrupt, the mogul is unstable whereas Clinton would only maintain the status quo. Lahren pushed back on Howe, saying he is over-exaggerating Trump’s part in the rise of the “alt-right,” and she wondered whether he also considered her part of the ultra-conservative fringe.

Howe told Lahren he considered her an alt-right “enabler,” just as he was when he used to make “hyper-partisan” political arguments in order to create an “outrage” factor. While Howe said this outrage has its purpose, it has created a “hyperbolic,” detrimental effect on the electorate’s political thinking.

Lahren also challenged Howe on whether he’s rejecting the peoples’ choice, given how many people supported Trump and enabled his victory in the primaries. Howe opined that new voters were not worth the price of alienating fellow #NeverTrumpers and other Americans disgusted by the mogul.