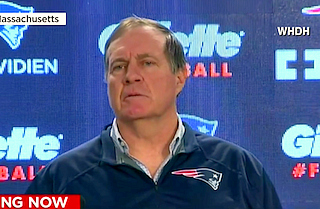 Here is the 90128323th explanation for DeflateGate: according to NFL sources, the league now believes that a lone ball boy of the New England Patriots was responsible for deflating the footballs.

According to Fox Sports reporter Jay Glazer, NFL sources have pinpointed a locker room attendant who “allegedly took balls from officials locker room to another area on way to field”. While they are unsure whether there was any wrongdoing on is part, “he is a strong person of interest.”

Show of hands: who’s a skeptic?

"I'm going to do this even though I haven't cleared it with Brady or Belichick." — No Patriots ballboy, ever.

Major question I have following today's ball boy report: Which room did he walk into? There is a bathroom between officials' room and field.

So, if there really is a rogue ballboy, Belichick's science was bullsh*t. Right?

Who knows, we might not even find the ballboy to begin with: