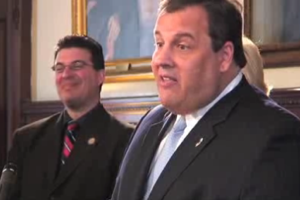 Last November, New Jersey traded away their Illinois-born, Goldman Sachs-bred chief executive for a take-no-prisoners, crime-fighting New Jersey stereotype, and now they get to reap the entertaining rewards. At a press conference yesterday, the Star-Ledger‘s Tom Moran questioned Governor Chris Christie about his whether his “confrontational tone” was healthy for the legislative process, to which the governor replied “You must be the thinnest-skinned guy in America” and warned, “you should really see me when I’m pissed. That’s not confrontational, alright?”

What Moran called a “confrontational” tone, Christie argued was simply his manner of carrying himself, and that he did not feel the need to modify his attitude to make the press more comfortable:

He concluded by rebranding himself “honest and refreshing,” and hoping the media would pick up on that description of him. Moran responded to the press conference in the Star-Ledger, calling it a “pity.”