One Dead, Others Injured After Construction Crane Collapses in Manhattan (UPDATED)
video

One Dead, Others Injured After Construction Crane Collapses in Manhattan (UPDATED) 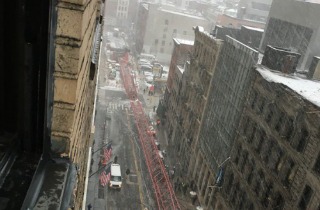 Disaster struck in the Tribeca area of Lower Manhattan this morning when a massive construction crane toppled over.

The crane on 40 Worth street toppled over at around 8:25 this morning, resulting in the street being blocked off for rush hour traffic, while several vehicles were crushed. While it is currently unclear if people were in their cars when the crane came down, the incident has resulted in at least one fatality, and at least two others in serious condition.

“I could hear the bending of metal. I think it hit the side of the building,” one witness said, according to the Daily Mail. “I didn’t know what was happening because it was happening so fast.”

The New York Fire Department is on scene and are currently working to evaluate the safety of the area. While subway stops are being skipped and ABC reported that the impact caused a water main break and possibly a gas main break, an initial survey indicates that the structure of the nearby building are still stable.

It is currently unknown what caused the crane to fall.

Numerous reporters are at the scene, and pictures and video from the collapse are pouring in on Twitter:

Due to a construction incident, expect traffic delays & emergency personnel near W. Bway & Worth St in Manhattan. pic.twitter.com/GXAXXPJYwF

This story is breaking, and we shall update as more information becomes available.

Watch live coverage on the story in the video above, via NBC.

UPDATE: 11:40 A.M. EST NBC has received overhead video of the moment the crane came down.

Mayor Bill de Blasio held a press conference discussing the collapse, where he said that city officials were still working to secure the site, and that gas has been turned off for the area due to leaks. De Blasio said that the crane was in the middle of being adjusted to a secure position at the time, and that workers in the area managed to prevent more casualties by directing people away before it happened