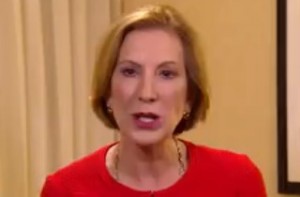 Having already played the woman card that she takes out when she needs it and buries in the deck when it comes time to make policy, Fiorina called in to Morning Joe to appeal to the other candidates’ sense of cowardice. She congratulated the likes of Ted Cruz and Ben Carson for backing her position, and claimed that other candidates were lobbying against her because they’re afraid to debate her. Along the way, though, she seemed to weirdly concede Hillary Clinton‘s superiority:

“I think they are afraid to debate, I don’t know how they’ll defeat Hillary Clinton if they can’t even debate me.”

The implication there is that debating Carly Fiorina is a much lesser challenge than defeating Hillary Clinton, which is definitely true but weirdly honest.

As you can probably tell, I’m not the world’s biggest fan of Carly Fiorina, but regardless of her reckless lying about Planned Parenthood and other lesser offenses, I do believe that there is no excuse for the RNC and ABC News to exclude her from the debate tomorrow night. The debate rules that they came up with are as follows:

But as Fiorina points out, those rules were made before three candidates dropped out of the race following Iowa, some of whom might still be around if not for this arbitrary pattern of lower-tiering certain candidates. Those three and Fiorina have an excellent case to make against the RNC’s debate process, because as silly as they are, they weren’t the “Rent is Too Damn High” guy or Basil Marceaux Dot Com, they’re all mainstream figures in the Republican Party. None of them should have been excluded or shunted to an undercard.

Now that the field has been winnowed to eight, though, there really is no reason to keep Fiorina off that stage, and a good reason to include her. Fiorina might not have any recourse under election law, but her exclusion at this debate could be the basis for some bang-up civil litigation. She can certainly prove injury, and I’m not sure if the RNC really wants to test the ground on discrimination.