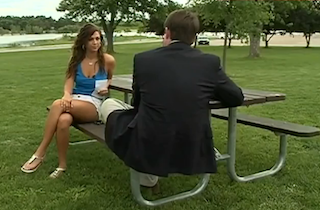 It’s fair to say that an X-rated photo shoot on a Catholic school’s campus won’t end well. But that doesn’t stop some from trying. Namely, Valerie Dodds, a 19-year-old who sought “payback” against her classmates who mocked her aspirations of joining the adult entertainment industry. (Well: That’s one way to go about it.)

“It looked like something that I just kind of wanted to try, I guess,” Dodds told KETV. She graduated Lincoln East High School after transferring from St. Pius X High School during her senior year. Everyone at her high school, she said on her website, “had something rude to say to me when I started my website and so this is my tribute to all of you lol.”

Last month, Dodds “sneaked onto the Lincoln Pius X campus one night last month to pose naked on the school’s football field, her leg hanging in front of the school’s motto — ‘Restore All Things in Christ’ — and with a crucifix dangling.”

“That’s when all the Pius kids were saying mean things, and that’s when I decided to go there and show them I’m here to stay,” she told KETV.

Meanwhile, the school is praying:

“More important to us, however, is that we constantly follow our school’s motto: To Restore All Things in Christ. To that end, we are praying for the young lady and her family, and we stand ready to offer forgiveness and support should she seek it.”