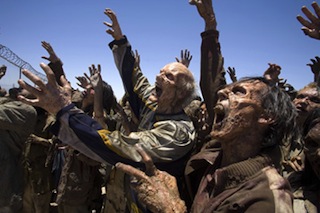 The Associated Press is reporting that a Toronto emergency medical crew was called to the scene of an accident and quickly faced what appeared to be the worst accident they had ever seen. Presumably there was blood ever, skin hanging from people’s faces, limbs severed or removed. It must have been horrible! However, the paramedics quickly realized that all the gore was fake. They’d been called to the set of the new Resident Evil movie and all the victims were actors playing zombies.

Apparently a platform that a number of extras had been standing on had broken causing a number of actors to fall. 16 were injured although none of the injuries were life-threatening. That’s not what it looked like though.

Toronto emergency medical spokesman Peter Macintyre said the victims’ costumes made it difficult at first for crews to assess the severity of their injuries.

Paramedics responded to the call from Cinespace Film Studios around 8 a.m. to find what appeared – thanks to Hollywood special effects makeup – to be people who had suffered some untold catastrophe.

‘I could see the look on the first paramedic, saying ‘Oh my God,” Toronto emergency medical services Commander David Ralph said with a laugh.”

Oh man. I’ve had no desire to see a Resident Evil movie since the first one (I’m sorry. Once you fire George A. Romero from a zombie series, I’m out), but, if they put video of the paramedics reaction on the DVD special features, I’ll buy it in a second.

Until then, I can only assume the situation went something like this.