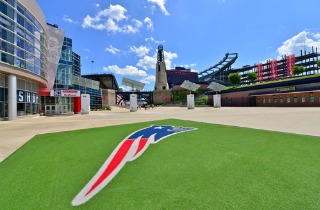 New England Patriots owner Robert Kraft has a statement out today saying he’s been completely open and transparent with the NFL every step of the way during their investigation into “DeflateGate.”

Yesterday, coach Bill Belichick and QB Tom Brady both denied any involvement in the scandal involving underinflated footballs that may have helped the Patriots beat the Indianapolis Colts.

Team owner Robert Kraft broke his silence today in a statement stating his full commitment to getting to the bottom of this and preserving the integrity of the game:

I instructed our staff to be completely cooperative and transparent with the league’s investigators. During the three days they were here, we provided access to every full- and part-time employee the league’s representatives requested to speak with and produced every communication device that they requested to search. It is an ongoing process that the league and our team are taking very seriously. I very much support the league’s desire to conduct a complete investigation and welcome the appointment of Ted Wells to lead the process. Competitive balance and the integrity of the game are the foundation of what makes our league so special and I have the utmost respect for those principles. Our organization will continue to cooperate throughout the league’s investigation.

The media coverage of the controversy, meanwhile, has been off-the-charts. Cable news was all over the Brady presser yesterday, and DeflateGate led all three major evening newscasts.