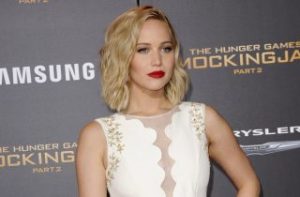 Jennifer Lawrence appeared on The Graham Norton show this week, and she retold the story of that time she scratched her butt on culturally sacred rocks in Hawaii and almost killed the sound guy on The Hunger Games when one of the rocks rolled away.

Lawrence said “All the Hawaiians were like, ‘Oh my God, it’s the curse!’ And I’m in the corner, going, ‘I’m your curse. I wedged it loose with my ass.”

People on Twitter are not happy, and have been sounding off on Lawrence for being insensitive.

“Hey Hawaiians, I scratched my ass with your sacred stones, broke one, almost killed a man, and ? at your spirituality.”-Jennifer Lawrence https://t.co/1ihjGuddVy

“Hey Hawaiians, I scratched my ass with your sacred stones, broke one, almost killed a man, and ? at your spirituality.”-Jennifer Lawrence https://t.co/1ihjGuddVy

This is truly disgusting, even for someone like Jennifer Lawrence pic.twitter.com/fegNPkzy9P

Jennifer Lawrence is so ugly. She knew the rocks are sacred to their culture & went out of her way to disrespect it. pic.twitter.com/PjiPldQgTa

Please get everyone to rt this to get Jennifer Lawrence to apologize to the Hawaiian people. This is NOT okay. ++ pic.twitter.com/kjicMX65B6

what quirky racist adventure will Jennifer Lawrence go on next?

Another reason Jennifer Lawrence is so annoying. Knowingly messes with something sacred to Hawiians. Then brags and makes a joke about it. https://t.co/EB6VFz0JzN