Police Respond to False Report of Gunshot at Stephen Collins’ Home, Find Nothing 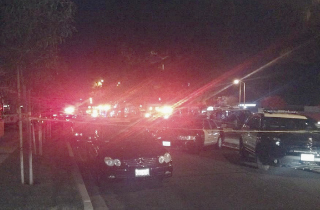 No, there was no gunshot at actor Michael Collins‘ residence. The actor wasn’t even home.

Collins was all over the news Tuesday when TMZ released audio of the 7th Heaven star confessing to molesting multiple underage girls over several years.

Late into the evening, Twitter was abuzz when actress Donna D’Errico alleged that the embattled star had shot himself:

That's all I know. The police have the street cordoned off and aren't even letting residents in..

She also posted a photograph of police vehicles, with red sirens glaring on a dimly-lit street. ABC 7 seemingly echoed her claims, reporting via Twitter:

But as it turns out, the Los Angeles Police Department had responded to an errant call. Collins was not home at the time, and according to multiple outlets, his reps say he is alive and well:

BREAKING: #LAPD has confirmed to me that NO ONE WAS INSIDE ACTOR STEPHEN COLLINS HOME. NO ONE WAS SHOT. Hoax call. Now RT this.