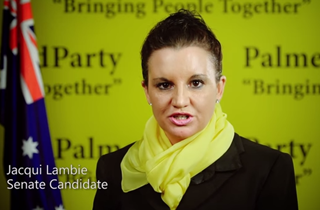 Jacqui Lambie, the 43-year-old Senator of Tasmania, hasn’t gone on a date in 11 years, but the Australian politician is ready to get back in the game. While appearing on an Australian talk radio show, the politician said she was ready to go on the prowl, and knows what she wants in a man: “They must have heaps of cash and they’ve got to have a package between their legs, let’s be honest. I don’t need them to speak, they don’t even need to speak.”

Later during the program, a 22-year-old named Jamie called in and offered to take the senator on a date. “I’ve never thought about being a cougar, to be honest,” Lambie noted. “I’m just a bit concerned because you’re so young, I’m not sure you’d be able to handle Jacqui Lambie…I guess the question is, are you well-hung?”

But later in the day, while Australia’s most eligible bachelors were probably working themselves into a tizzy over the prospect of dating a Senator, an embarrassed Lambie soon released this statement to News Corp Australia:

“When Kim and Dave on Hobart’s Heart FM 107.3 this morning asked me about my love life in a light hearted segment — I tried to cover up my embarrassment by making a joke,” she said.

“A lot of people laughed — including the tradie I was talking to — some people may have got offended.

“I apologise to any radio listeners who may be offended by my comments on Kim and Dave’s show.”
Ms Lambie went on to say that her political enemies would make a big deal out of her comments.
“But the reality is I was talking with Kim and Dave on Heart FM — not Sarah Ferguson on the ABC,” she said.