President Obama Tied With Romney In Tennessee, According To Poll

President Obama Tied With Romney In Tennessee, According To Poll 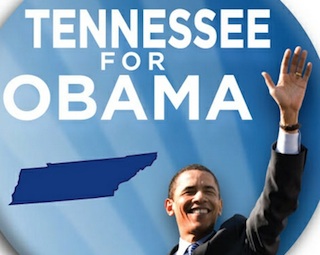 John McCain beat Barack Obama comfortably in Tennessee in 2008 by 15 percentage points, but a new poll in the Volunteer State may signal trouble ahead for Mitt Romney. According to a Vanderbilt University poll of 1,002 Tennessee residents released over the weekend, President Obama is in a virtual tie with the presumptive Republican presidential nominee. The poll shows that, among adult voters, 42 percent would vote for Romney and 41 percent for Obama. The Tennessean‘s Michael Cass notes that “the survey, conducted May 2-9 by Princeton Survey Research Associates International for Vanderbilt, had a margin of error of 4 percentage points.”

RELATED: President Obama Tied With Mitt Romney In Arizona According To New Poll

Tennessee Democratic fundraiser Bill Freeman was ecstatic over the news. “We’ve been tracking it for some time,” Freeman explained. “We’ve watched it go from a solid-Republican (state) to a leaning-Republican to, we believe, a toss-up state now. We think we’re just a point or two behind and that winning Tennessee is in our grasp…and we’re especially excited about what that’ll mean to the down-ticket races across the state.”

On the other hand, Politico’s Charles Mathesian advised political observers to take the poll with a grain of salt, calling it a “blowout wrapped in a nail-biter” and quoted the poll’s most positive aspects for Romney:

[Vanderbilt University political science professor John] Geer cautioned that the registered voters among the poll participants favored Romney by a larger margin, with 47 percent saying they would vote for the former Massachusetts governor and 40 percent for Obama. He said that’s a more likely outcome in November.

“It’s not that close a race,” Geer said, predicting Romney would prevail with little trouble. “I suspect a lot of hard-core conservatives are still getting used to the idea of Romney as the nominee, and by the time the general election comes along, they’ll be in lock step with Romney. But right now there’s a small chunk that are still being cautious.”