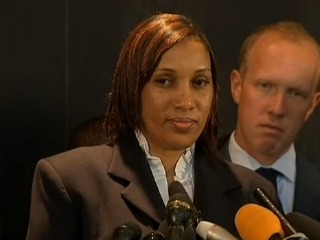 Prosecutors in the case against former IMF chief Dominique Strauss-Kahn have filed a motion to dismiss the charges against him, citing issues with Nafissatou Diallo‘s [pictured] credibility. Diallo, you’ll recall, is the Sofitel Hotel maid who alleged Strauss-Kahn raped her in his hotel room. Her attorney, meanwhile, maintains that she was not treated fairly throughout the case and that Manhattan District Attorney Cyrus Vance Jr. essentially “turned his back” on his client. As such, he has filed a separate motion of his own:

Thompson on Monday separately filed a motion to disqualify the Manhattan DA’s office from handling the case, asking that a special prosecutor be appointed. He argued that the DA has “sabotaged” the prosecution, leaked false statements about the maid to the press and subjected her “to verbal abuse and outright disrespect.”

The motion quotes a prosecutor telling the maid’s attorney in June that “no one with half a brain would ever put her on the stand,” and alleges a member of the prosecution team “repeatedly screamed at and outright disrespected her.”

“In short, the DA has demonstrated clear bias and prejudice and this court respectfully should appoint a special prosecutor to restore the confidence in prosecution of this matter,” the motion says.

Strauss-Kahn’s lawyers have claimed that sexual contact between the two had been consensual.

Diallo has been at the center of much controversy since coming forward with her allegations, with certain media outlets reporting on her connections to illegal activities as well as the fact that she told lies about certain aspects of her past and changed portions of her account of what happened between her and Strauss-Kahn. In July, she gave an interview to Good Morning America’s Robin Roberts, attempting to put a face to her story and to let Strauss-Kahn know that “that there is some places you cannot use your money, you cannot use your power when you do something like this.”

Strauss-Kahn is due in court tomorrow, when the judge is expected to dismiss the charges against him. He was first arrested a little over three months and was released from house arrest about seven weeks ago.