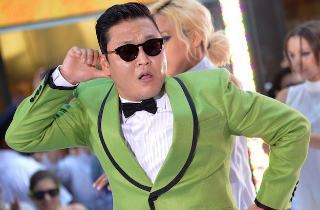 This morning, the news broke that Korean mega-star “Gangnam Style” singer PSY had participated in several anti-American rallies during the Iraq War. In one protest, he smashed a miniature American tank to protest; in another he rapped about “slowly and painfully” killing American soldiers and their families.

The revelations generated much outrage, and considerable media coverage, prompting the man behind the most-liked and most-watched YouTube of all time to issue an official apology.

Via publicist Matthew Hiltzik, PSY expresses deep regret and pain for having said those particular words:

“As a proud South Korean who was educated in the United States and lived there for a very significant part of my life, I understand the sacrifices American servicemen and women have made to protect freedom and democracy in my country and around the world. The song I was featured in – eight years ago – was part of a deeply emotional reaction to the war in Iraq and the killing of two Korean schoolgirls that was part of the overall antiwar sentiment shared by others around the world at that time. While I’m grateful for the freedom to express one’s self, I’ve learned there are limits to what language is appropriate and I’m deeply sorry for how these lyrics could be interpreted. I will forever be sorry for any pain I have caused by those words.

“I have been honored to perform in front of American soldiers in recent months – including an appearance on the Jay Leno show specifically for them- and I hope they and all Americans can accept my apology. While it’s important that we express our opinions, I deeply regret the inflammatory and inappropriate language I used to do so. In my music, I try to give people a release, a reason to smile. I have learned that thru music, our universal language we can all come together as a culture of humanity and I hope that you will accept my apology.”