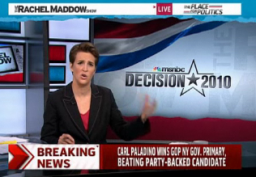 So apparently his last ditch, bottom of the barrel effort to gin up support by capitalizing on the Lower Manhattan mosque furor did not help Rick Lazio in his bid to win the Republican primary for Governor last night. In one of the two major upsets of the night Lazio was defeated by Carl Paladino, a Buffalo multimillionaire. Paladino, a Tea Party candidate won in a landslide and dealt, in the words of the NYT, what could be a “potentially destabilizing blow for New York Republicans.” Also unclear is whether the New York Republicans just jumped out of the frying pan and into the Tea Party fire. From the Times:

It put at the top of the party’s ticket a volatile newcomer who has forwarded e-mails to friends containing racist jokes and pornographic images, espoused turning prisons into dormitories where welfare recipients could be given classes on hygiene, and defended an ally’s comparison of the Assembly speaker, Sheldon Silver, who is Jewish, to “an Antichrist or a Hitler.”