Rand Paul Warns: FDA Is ‘Coming After Your Doughnuts’ 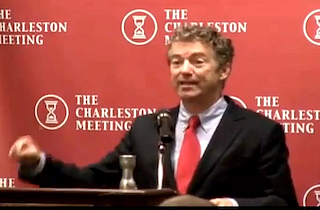 In some of Senator Rand Paul’s (R-KY) first non-plagiarism news in a while, the Kentucky senator warned on Monday that the Federal Drug Administration’s new ban on trans fats was another intrusion by the nanny state, this one aimed at your morning indulgences.

“They’re coming after your doughnuts!” Paul told a crowd at The Charleston Meeting in South Carolina, in addition to taking a shot at New York City Mayor Michael Bloomberg’s attempted soda ban.

“Some unelected bureaucrat has banned trans fat,” he continued. “So I say, we need to line every one of them up. I want to see how skinny or how fat the FDA agents are that are making the rules on this. Not only that, any of them with a BMI over 16, or whatever the number you’re supposed to have, I want to see them on the treadmill, and I want to see someone from OSHA lashing them while they’re working on the treadmill.”

“If we’re going to have a nanny state, and everybody’s gotta eat the right thing, and you can’t eat a doughnut, maybe we ought to enforce it on the government workers first,” Paul said.

They are not, in fact, coming after your doughnuts. Trans fats are not essential to make doughnuts or, really, anything. Some restaurants still use trans fats because, even though they’re incredibly bad for you, they’re longer-lasting and slightly cheaper than other oils, and very few customers would ever know the difference.